skip to main | skip to sidebar

Since the US Open moves around the country quite a bit, it has given me numerous opportunities to add to my "states I've played in" list. I've played in 12 US Opens. 7 of them brought me to a state I have never played in before. Some of those states I've not been back to since I played in the US Open there. I regret not going to the US Open when it was held in Hawaii. That would have added a difficult state to my list.

My 12th US Open brought me to Indiana. As I commented in my Kansas report, often these tournaments are in hotels that are kind of on the edge of town. Unless I have access to a car and some free time I don't get to see much outside the confines of the hotel. On this particular trip I had no time to see the sights, though Eric Strickland (ES_Trick) had offered to take me around the area. My visit to Indiana was confined to playing chess, attending meetings and socializing over a meal or glass of wine in the hotel restaurant and bar.

However since I took a train in from Chicago I did get to view the Indiana countryside as Amtrak's Hoosier train made its way towards Indianapolis. Yes, Indiana is as flat as people say it is. I saw lots of fields and a few cows along the way. As for downtown Indianapolis, the train/bus station isn't in the most glamorous part of town. To add insult to injury the major attraction near the train station is the stadium where the Indianapolis (formerly of Baltimore) Colts play. For this old time Baltimore Colts fan, who never forgave Robert Irsay for stealing her football team in the dead of the night, it was a hard sight to see.

The US Open is the last of the large one section Swiss System events. However with all the different scheduling options it doesn't truly become a single section tournament until the merge occurs at round 7. However no matter which schedule one opts for, there is always the wide swings in ratings from one round to another. At 1700 I can go either way in terms of getting paired way up or way down. 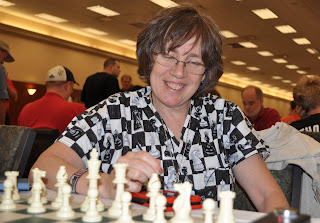 First Round in Indiana
photo by Zeljka Malobabic of Mon Roi
In the first round I just made the top half on the 4 day schedule group, so I got paired all the way down to an unrated. However playing an unrated doesn't necessarily mean you're playing a much weaker player. This unrated I was paired against had already played in a few tournaments and has provisional rating of 1749 on the September rating list. However they were using August ratings so I was playing an "unrated". If I had been playing two boards higher I would have played an 870 who only won 1 out of the 8 games she played.

Personally I prefer the challenge of playing an unrated of unknown ability. It adds a certain mystery to the game, not having much knowledge of a player's history. I probably played a bit tentatively. Perhaps I was a little psyched out by the Russian name. I can count on one finger the number of weak Russian unrateds I've played. The game ended out a draw which seems like a reasonable result between two players rated in the 1700s. However I did miss a move that just wins a piece outright. I didn't even realize it until doing analysis with Fritz long after the tournament was completed. Here is that game.


The next round I was on the other half of the break and got paired against International Master Ron Burnett who had taken a half point bye for round one. He drove up from Tennessee that same day and got caught in a bad traffic jam on the Louisville Bridge. The problem with getting stuck in bad traffic on a bridge is there is nowhere else to go. I'm anxiously waiting to see if I would have a game. I did not want a forfeit win. In the meantime he's trying to get to Indianapolis, and wondering if he will make it on time.

I couldn't sit still, and did not want to stay at the board and watch his time run down. I left the room, and was talking to various friends bemoaning the fact that I might win on forfeit. With less then 10 minutes to go, I said to a friend "I guess I'll go in and watch my opponent's clock run down." I figured at this point there wasn't much chance he was showing. However when I got to the board I saw that a move had been played and my clock was running. He had arrived while I was out of the room. He had 6:30 left on his clock.

I actually played reasonably well against him. I did not try to out blitz him with my big time advantage. However when I decided I needed to open things up a bit, that is when I got myself in trouble. Sometimes I feel like I have a really awful position and I'll make a rash move that was not necessary. Quite often my position is not as bad as I think, but because the inner pessimist comes out, I do something rash figuring "I'm busted so why not?". I really have to try to stay more positive. Here's the game.


My first win in Indiana would not come until round five. I would draw and lose to a couple of 1300s before scoring a full point. My fourth round loss can be found here. I got paired down to an 1101. There wasn't much to the game. He dropped a few pawns and I simplified. The ending was pretty straight forward. Here's the game with no annotations.


More games and stories about the tournament can be found here and here.
Posted by Polly at 8:00 PM 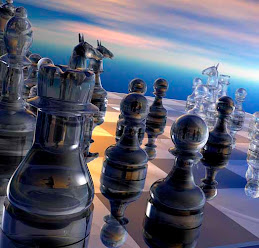 Polly
I love to compete, whether it's triathlon, bike racing, running, Tae Kwon Do or chess. I may be a "jack of all trades, and master of none." However I love the challenge of testing myself against others, but also against myself. After a long hiatus from the sport of triathlon, I made my return in 2014, just in time to age up. Love being back. I forgot just how much fun it is.

My Other Chess Blog